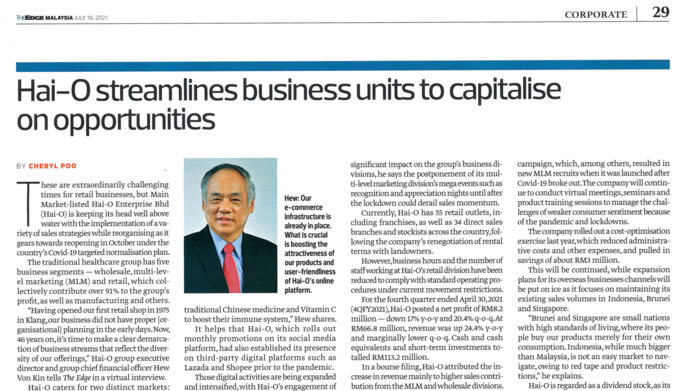 THESE are extraordinarily challenging times for retail businesses, but Main Market-listed Hai-O Enterprise Bhd (Hai-O) is keeping its head well above water with the implementation of a variety of sales strategies while reorganizing as it gears towards reopening in October under the country's Covid-19 targeted normalization plan.

The traditional healthcare group has five business segments-wholesale, multi-level marketing (MLM) and retail, which collectively contribute over 91% to the group’s profit, as well as manufacturing and others.

“Having opened our first retail shop in 1975 in Klang, our business did not have proper [organizational] planning in the early days. Now, 46 years on, it’s time to make a clear demarcation of business streams that reflect the diversity of our offerings, ”Hai-O group executive director and group chief financial officer Hew Von Kin tells The Edge in a virtual interview.

“It will give the public and all stakeholders a very clear understanding of Hai-O’s business structure. This is also to enable Beshom Group to achieve flexibility in the expansion of new business segments when opportunities arise, ”Hew explains.

The company has also proposed to terminate its existing employee share option scheme (ESOS) and replace it with up to 15% of the issued share capital of Beshom, including its treasury shares.

“Owing to Covid-19, consumers have been seeking alternative supplements such as traditional Chinese medicine and Vitamin C to boost their immune system,” Hew shares.

It helps that Hai-O, which rolls out monthly promotions on its social media platform, had also established its presence on third-party digital platforms such as Lazada and Shopee prior to the pandemic.

Those digital activities are being expanded and intensified, with Hai-O’s engagement of a telecommunications company for its one-stop e-commerce solution, through which the group is strengthening and refining its digital presence.

The company hopes that its online retail business will pick up this year and it has improved the platform.

“Our e-commerce infrastructure is already in place. What is crucial is boosting the attractiveness of our products and user-friendliness of Hai-O’s online platform. Technical glitches and other inconveniences can frustrate buyers. Therefore, we have ironed those out and expect to launch our revamped e-commerce for the retail segment by August. Hopefully, it will attract more online buying in view of the prolonged pandemic and potential extension of movement restrictions, ”says Hew.

Touching on the prolonged lockdown’s most significant impact on the group’s business divisions, he says the postponement of its multi-level marketing division’s mega events such as recognition and appreciation nights until after the lockdown could derail sales momentum.

Currently, Hai-O has 55 retail outlets, including franchises, as well as 34 direct sales branches and stockists across the country, following the company’s renegotiation of rental terms with landowners.

However, business hours and the number of staff working at Hai-O’s retail division have been reduced to comply with standard operating procedures under current movement restrictions.

In a bourse filing, Hai-O attributed the increase in revenue mainly to higher sales contribution from the MLM and wholesale divisions. Net operating profit margin improved to 19.1% from the previous corresponding period’s 16%, owing to ongoing cost optimization initiatives and a favorable change in sales mix.

While Hai-O declines to disclose its revenue target for the year, Hew admits that maintaining FY2021’s revenue of RM255 million will be a challenge and that much will hinge on the success of the National Immunization Program targeting 80% herd immunity by September.

The Ministry of International Trade and Industry's authorization of Hai-O to operate as an essential offerings provider since last year has been a crucial step forward for the company, as business disruptions have been fairly minimal, save for the ban on supplying non-essential items to duty-free outlets and the restriction on its transporters from delivering goods to areas currently under the Enhanced Movement Control Order, says Hew. "Judging by the rate of vaccination as announced by the authorities, and barring any unforeseen circumstances, we are confident of performing in 2H to recover from the impact of [the MCO] in 1Q."

He says Hai-O will intensify its successful recruitment programs such as its “Stay at home, earn from home” free membership campaign, which, among others, resulted in new MLM recruits when it was launched after Covid-19 broke out. The company will continue to conduct virtual meetings, seminars and product training sessions to manage the challenges of weaker consumer sentiment because of the pandemic and lockdowns.

The company rolled out a cost-optimization exercise last year, which reduced administrative costs and other expenses, and pulled in savings of about RM3 million.

This will be continued, while expansion plans for its overseas businesses channels will be put on ice as it focuses on maintaining its existing sales volumes in Indonesia, Brunei and Singapore.

“Brunei and Singapore are small nations with high standards of living, where its people buy our products merely for their own consumption. Indonesia, while much bigger than Malaysia, is not an easy market to navigate, owing to red tape and product restrictions, ”he explains.

During the financial year ended April 30, 2021, Hai-O paid out a single-tier interim dividend of four sen per share in March and declared a second interim dividend of five sen per share to be paid on July 29. It also declared a distribution of one treasury share for every 26 existing held to be transferred to shareholders on June 22 for the current financial year ending April 2022. Collectively, the dividend yield amounts to more than 10% for the year.

Shares in Hai-O closed last Wednesday at RM2.08, some 8% lower than its year-to-date high of RM2.26 on Feb 16. At current prices, the company has a market capitalization of RM624.62 million.

At press time, Hai-O had been granted a July 16 hearing by the High Court to approve its proposed internal reorganization plan, which it had announced in a filing with Bursa Malaysia on Jan 19. There have been several case management deferments since January because of extended MCOs.